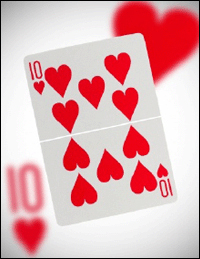 Perform a mental card miracle with ten half cards, cut from five different cards. A spectator is allowed to freely shuffle the pieces and then deal out any number of pieces between himself and another spectator. Using the number of pieces the spectator dealt as their numbers, the pieces are assembled and each spectator secretly notes the card at their number. The spectators each now remove their cards from packet and place them face down on the table. You show your prediction and ask the spectators to turn over their half cards – EACH SPECTATOR HAS HALF OF THE SAME CARD and it MATCHES your written prediction!

– The entire effect is virtually self-working
– Absolutely no sleights or difficult moves
– No extra cards or gaffs
– Make it up in minutes
– Works with any size cards – even jumbos!

A true mental card gem you can carry in your pocket and do anytime, anywhere!